Pretty Close to Perfection, Our Weekend in Cascais, Portugal

It sounds a little pathetic. Hands up, I’m the first to swallow my urge to vomit at parents who live vicariously through their children. But there’s a difference between forcing your own failings upon your offspring and encouraging them to develop their own sense of self.

And there is a universal truth that only parents can understand: seeing your kids happy makes you happy. It’s weird but true. Their happiness is contagious and it makes you tingle inside.

We just had one of those weekends. Cataleya had been asking to go to the swimming pool for days. We don’t have one here and the beaches are not for kids, especially ones who don’t know how to swim.

The biggest wave ever surfed was on Portugal’s West coast, after all. An 80-foot monster that smashed the Guinness record. Not exactly tranquil and welcoming for babies.

So, we went to Cascais. And we’ll be going back to Cascais to see all the things we didn’t see next week. Stunning scenery, lofty mansions, a harbor filled with yachts, a pristine coastline and a castle. We glossed over them all on a mission to spend the weekend in the pool.

It didn’t disappoint. Like the three amigos, when the planets aline my two kids and I make superb traveling companions. We arrived just in time to enjoy the early evening sunshine by the pool with slides, an adventure park behind, and children from different places; Brazil, Spain, the UK, and Holland. 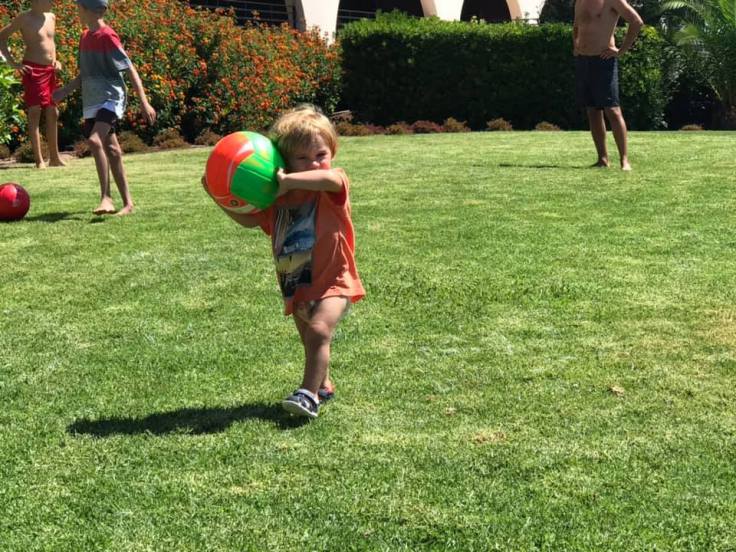 Dancing in the Restaurant

We didn’t have many options after arriving late and immediately leaping into the pool. We’d have to eat in the hotel restaurant. It was OK. But those who know me well know that I fail to see the pleasure in buffet restaurants.

If I’m going to pay to eat out, I want them to bring it to me. I’m really not interested in serving myself–and far less interested in trying to serve myself and two halflings while one tries to escape the baby chair and the other dips their fingers in the community ice cream.

Trying to do a buffet restaurant with two small children is not fun. Just as my irritation was about to reach fever pitch (there is a limit to the number of times one can say “sit down in your chair and eat your food” until you lose it), like a gift from the Gods, a Portuguese band dressed in local costume descended into the bar.

The children were captivated. And I was allowed to eat at last.

They gawped, smiled, danced… and then joined in. While I was watching Valentino make friends with an elderly couple from Vigo, Cataleya had already inserted herself into the local band, dressed in costume, learning the steps.

They, I, we all laughed spontaneously and finally fell asleep contented and excited for the pool in the morning.

If you have money, serious amounts of money, I recommend you go to one of the hotels opposite. They were the definition of luxury, and right on the beach. But Vila Gale was not too shabby and had the best swimming pools I’ve seen in a long time.

The installations are a little old, but imagine my surprise (and content) when I pulled back a curtain to find a small kitchen in the room.

Let’s be clear, I was never going to cook a meal (and it would have been weird on top of all that carpet) but it meant I could give Valentino his milk and heat it in the evening and morning. Things like this are worth their weight in gold when you’re traveling with infants.

The weekend was perfect and that’s pretty much all we did–play in the park and the pools. The three of us took a long siesta both days and Valentino had no problem sleeping in the same room as us while we watched TV and listened (unwillingly) to the electronic music thumping from below from the party people who stay out after 10. 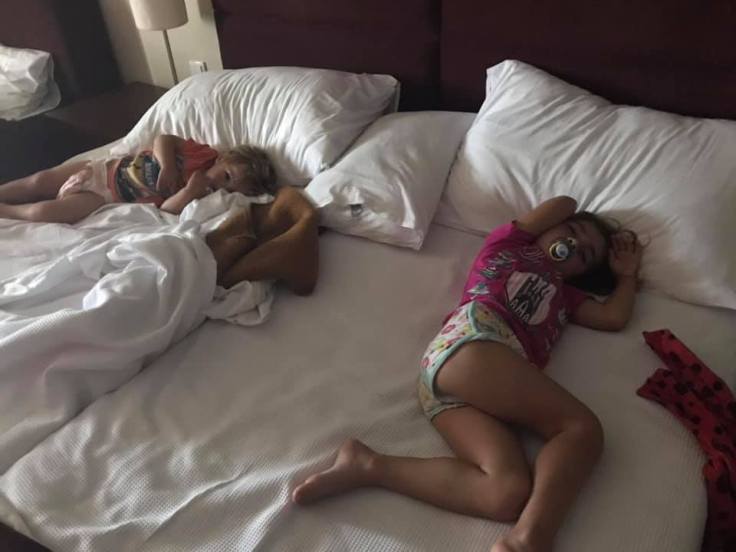 Valentino said more this weekend than I’ve heard him say so far. “Bravo,” “apple”, “this one,” “no”, “water”, and of course, “Cata.” At 20 months, some kids are already stringing words together. I’ve thrown a confusion at my poor toddler. He’s being spoken at in so many different languages now it’s amazing he says anything at all.

Cataleya at four years old is now teaching me Portuguese. It’s incredible. She says to me, “do you know how they say “XX” in Portuguese”? And then tells me. And when I don’t remember a word, I ask her and she knows it.

I can feel people staring, speculating, wondering. Where is the man? How does this woman manage to carry the two kids and pushchair up and down the stairs unaided? Why is that child running around the restaurant with no shoes? Where are they from? Was that Spanish I heard? English? And then Cataleya stops them all from staring by stripping down naked and running around the garden.

Every night, at “home” in our apartment in Ericeira, we stare out the window, look at the moon, at the movement below, and the people passing by. She always asks why the pavement is breaking as it has deep cracks in it from the sun. I think I usually reply with it’s getting old and damaged from the sun, rain, and wear and tear.

Yesterday, Cataleya was studying my face before we went to bed, and she said, “Mommy, your face is breaking”. I died a little inside.

Love my kids to pieces. Adore this corner of the world… and now I have finally kicked this stomach sickness to the curb, can’t wait to get back in the surf. 🙂 🙂 🙂