I Found My Temple in Bali 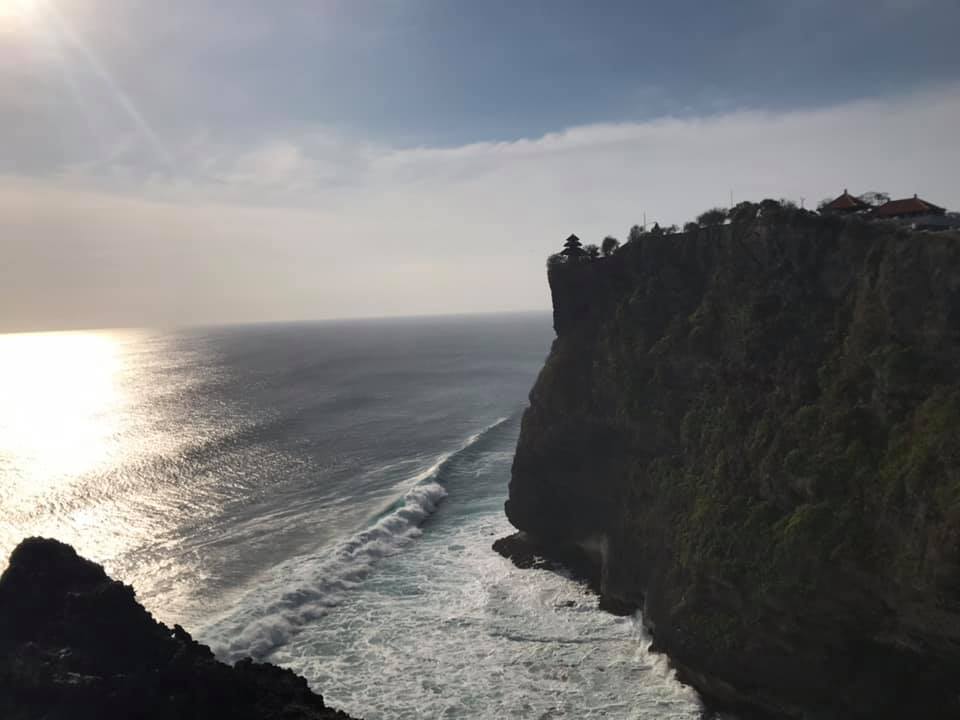 I haven’t watched Netflix in over two months. I haven’t even thought about it. Traveling this wide world of ours with two small kids provides plenty of streams of non-stop entertainment and fills every second of your day.

Man, am I tired. Valentino doesn’t want to sleep alone in the crib anymore. Cataleya stays up until I go to bed. They pretty much dictate everything that we do or see here, mostly ballparks, swimming pools, and playgrounds; but I want some cultural Bali as well.

I took them to a temple yesterday at Uluwatu. I wasn’t going to. All the reviews and guides of the temple advised staying away with small kids, as you had a long way to walk and some scarey monkeys. None of them spoke about being alone with TWO small kids but I had pretty much filed Uluwatu in the cabinet of places we would never see. Until I remembered, it’s all about compromise.

I would just take them to the temple anyway, what could possibly go wrong?

Maybe we could see it from the parking lot, or perhaps walk a few steps and at least drink in the vibe. I’m so glad I did. Of course, it wasn’t the spiritual experience it might have been had I been alone to wander off and discover the hidden coves, touch the ancient stone, close my eyes and really listen to the rolling waves of the Indian Ocean crashing upon the shore… But it wasn’t too shabby either. In fact, it was something close to being fun. 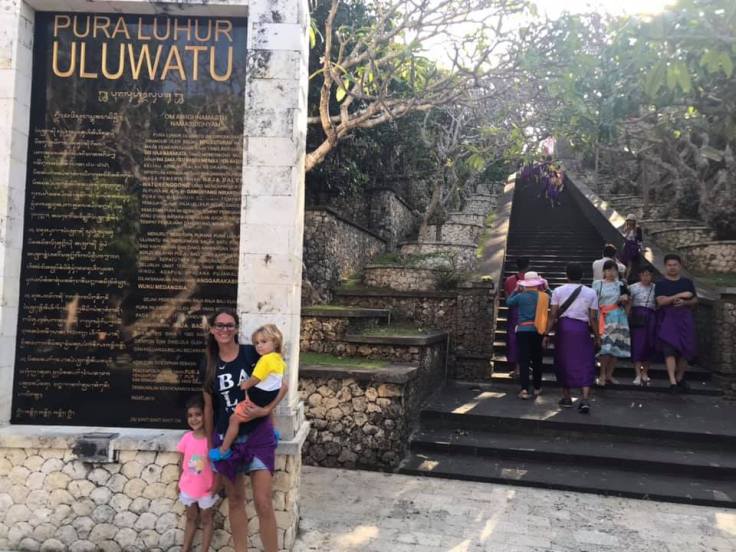 The journey was the usual colorful road trip that everywhere we go in Bali is. I’m starting to not only get used to it but to get pretty good at driving Balinese style–pretty much according to my own judgment.

My reflexes are getting better too, I double-check before any turn or movement in case a pedestrian, motorbike, or street seller swerve into my path.

It’s a miracle that anything works here at all. With a notable lack of transit police, traffic signs, well-paved roads, and highway code, it all seems to move along pretty efficiently.

There are a few things that still scare me sh**less. Turning into a street with a swarm of mopeds flying in your windscreen, strange roundabouts with large Buddha statues in the middle and no obvious way of the right lane to be in, and very very large open chasms of drainage on the sides of the road.

The kids enjoy our escapades in the car as well (unless I get really stressed and start swearing at Google Maps). There were plenty of curvy and steep streets, cheerful restaurants, market stands, and vantage points along the way.

As soon as we arrived, a monkey family put on a performance just for us in the parking lot. Having read about the evil monkeys at this temple who were prone to stealing personal items, I was loath to take a photo. I figured I would snap one later on when there were other people around, but we didn’t see anymore.

Still, both kids squealed with delight as the mother, father, and baby monkey played just in front of our car before bounding off into the wilderness again. I left the stroller in the trunk, knowing full well this wasn’t the place for it given the steps, and took Valentino in my arms, fully expecting Cataleya to quit before we started.

I’m not sure which planets were aligning for us, but she suddenly actively participated in the challenge, asking how many steps there were and if we could do them all. Of course, we didn’t, but we got close enough to see the majestic temple standing high on the clifftop and the thunderous waves below.

The kids are starting to be completely at ease with people from different nationalities and (OK, I’ll admit it, there were a few sweaty and whiney moments) but otherwise, we managed to cross something I had long desired to see off my list–of course, we ended up in Burger King afterward as a compromise (where you have to remember to ask for fries or your burger will be served with rice).

On the way there, we passed by an enormous statue that (after reading) is one of Bali’s most iconic landmarks and something like the third largest in Southeast Asia. It wasn’t going to be possible to push the kids even further that day but when the website said the experience would be unforgettable, I made an extra gap in my schedule to go back without them.

There isn’t a lot to say here except that my life has to have surfing in it. I am a different person when I cannot be in the waves. I caught my best wave in Bali today so far and the feeling rushed through every nerve in my body leading to a spontaneous shriek of joy as I rode it.

Everything about being in the ocean is amazing. The power of the enormous waves that crash over and over and over your head as you paddle against them and do your best to get out. The feeling of the board underneath you (or far from you when you’re scooped up in a whitewash of water), riding the drop as you catch the wave.

I’m finally falling in love with Bali and understanding why people come back and back here. At first, it was just a dirty, hectic, chaotic, constructed, touristy backwater where my child got sick. It’s since become some of the world’s best waves, incredible temples, the place where Cataleya taught herself to swim, and where I honed some incredible driving skills (all of which will be fineable offenses in Spain).

The website alludes to an “unforgettable journey” through this cultural park. In reality, I doubt I will remember it forever but still, I’m glad I went. Not really sure why I was there or what I wanted to see, I made it straight for the bigass statue.

I didn’t have time to get a guided tour though as I had to rush back to the kids but I’m pretty sure I can read all about how they built it on Wikipedia. At least I got to take photos and see a Balinese dance.

We’re doing it all in Bali. I took the kids back to Parklife in Canggu so they could play in the ball pits and go down the slides again, and we could drive back in the dark just for added fun. They have such a good time at this place though it was worth the additional stress.

The reality is biting that this summer is coming to an end. It feels like a lifetime ago since we were living in Spain. I can’t imagine what it feels like for the kids. It’s going to be a severe and gut-wrenching jolt when they both go back to school full time all day and I get serious again about work.

I mean, I worked hard in Portugal. Heck, I even managed to get to a conference in Barcelona for a few days, but Bali has been different and I’ve had to take my foot off the peddle. Seeing Cataleya so sick really put things into perspective. That, and turning 40. What the f**k am I doing in Bali if I can’t enjoy any of it after all? If I sit in my hotel room writing articles?

In that sense, the working part of this working vacation has dropped down to around 40 percent partly through obligation and partly through choice. I don’t consider that a failure though. It’s also been a wider part of a realization that I don’t want my life to be filled with nothing more than work.

And when you’re in Bali and you want to see a temple, go to the Goddam temple. 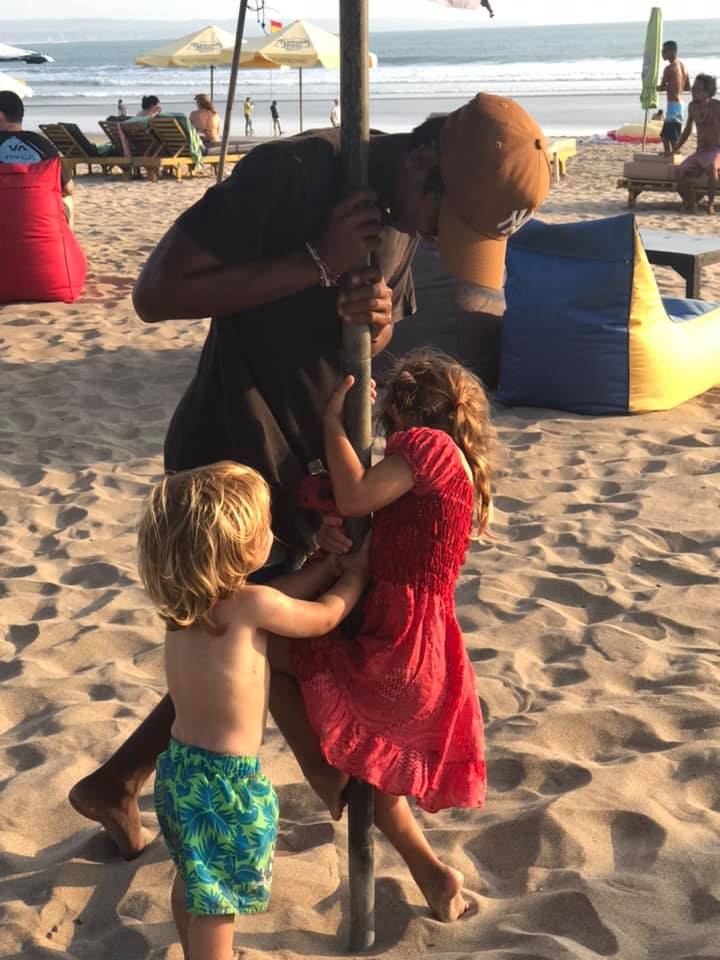 The kids have formed a bond so much stronger than they ever had before. They still hit and pinch each other and smack and whine and complain–but I see the little exchanges they think go unnoticed, the kisses and hugs, the sharing of candies, and Cataleya’s deep concern for her brother’s whereabouts if he’s not in sight for a few moments.

The bond between the three of us is even greater still (a little too much after the last month of sharing a room). As we drive along the streets decked out with the Indonesia flag, flowers, statues, potholes, street stalls, and markets, Cataleya enjoys playing co-pilot “good job! good job!” she says as I swerve passed the obstacles in my way. She’s also extremely impressed with my parking skills now.

Much of the surroundings and human behavior send me back to the streets of El Salvador or Guatemala. Although, it feels so much safer here.

This is certainly not Singapore. There is dirt, blatant disregard for rules and deep chaos–I rather like it, yet, looking in my rearview mirror at an army of motorbikes and mopeds, doesn’t phase me. That would be akin to certain robbery or death in Central America.

I can’t speak for the rest of Indonesia of course and I presume that traveling around there is harder and perhaps you need to take more precautions. But Bali is safe, welcoming, and indescribably beautiful when you start to peel off its layers.