Spain to Portugal – Balancing Kids with Travel and Work

I learned a lot over the last few days, which already seem like an eternity to me. Just like when I was a youth and the road was all-consuming. 24 hours could involve searching for anacondas, getting detained by Mexican police, or sleeping under the stars by a rapid river.

Of course, the first thing I took on board pretty quickly is the fact that traveling with kids is not the same as traveling alone. There’s no dancing on tabletops, leaping out of airplanes, or sipping pina coladas on a desolate beach.

But that’s a lesson I could have picked up without leaving the front door.

And it’s a life I miss every single day. But there’s no point in being nostalgic. Times change and needs evolve…

Even if I hadn’t had kids, I would have probably felt frustrated drinking store-bought beer on the beach, flipping the bottle open with a lighter, and letting my reasonably capable brain go to waste. We can’t be teenagers forever after all. At some point, I was going to have to justify the thousands I spent on education.

The weekend traveling with my kids was nourishing for my soul. And unsettling. They were awful. They were wonderful. They broke plates in restaurants and threw hissy fits on the floor.

They also jumped right into the adventurer role. Cataleya forced me to drive faster to get away from the towering wind turbines that she insisted were “monsters” coming to eat her.

For anyone wondering if they should visit Badajoz, I would say, don’t bother. And there are certainly prettier places in Spain than Ciudad Real. But it all depends what you’re looking for. I guess.

Sometimes it’s the places that never get seen, the lonely land that stamps a lasting impression on you greater than standing in the beating heart of Piazza San Marco surrounded by tourists in Venice.

The journey from Ciudad Real to Badajoz was certainly interesting. I thought my GPS had lost the plot but I stayed with it anyway; I wasn’t in a hurry. As we traversed a rural route with a speed limit of 40km, naturally, I burned it around 90. I grew up driving on impossibly narrow English country lanes after all. Spain’s got nothing on those.

There wasn’t a soul in sight. Not a person, not a cow, not a car, and (luckily) not even an infuriatingly lycra clad groups of cyclists hogging one lane either.

I stopped the car at one point just to contemplate the emptiness. The sun beat down and the pavement radiated with a red hot glow. Just as well I had half a tank in the car, I wasn’t expecting this, I thought I had a highway ahead.

This was the hardest leg of the journey, and the most expensive. You get charged every few minutes to use the highway here.

In stark contrast to the relentless heat of the Spanish interior, the rain was hurling itself at us sideways. The Portuguese also drive a little more recklessly than the Spanish, although it’s hard to compare the outskirts of Lisbon with Don Quijote’s land where only crows circled overhead.

Coming into Lisbon, we went over what I think was a beautiful bridge where you could see the whole of the capital. But all we saw was side sweeping rain rattling the car. It made me nervous that no one put their lights on in such poor visibility.

The piercing screams that came out of the back nearly made me crash into a bollard on more than one occasion. I thought one of the children was choking or dying but apparently losing a pacifier or dropping a donut were cause for equal hysterics.

Then we arrived and it was quaint. We had lunch in a restaurant and the waiter gave the kids both a ball of dough to play with. We went down with the sun feeling happy. 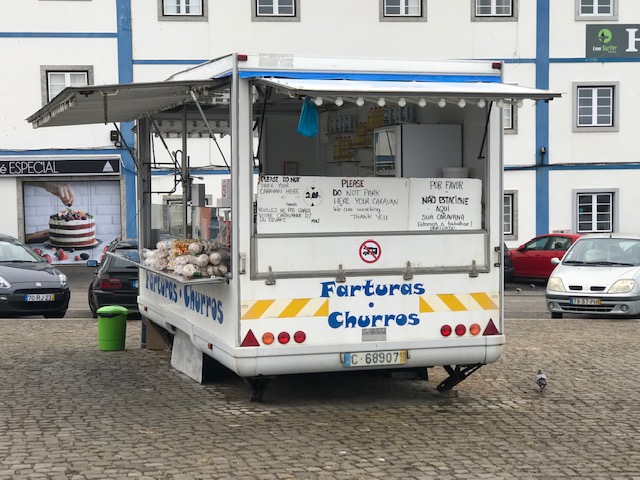 But today was traumatic as I tried to drop off two screaming and clinging children at a daycare center in a different country feeling like the worst person on earth.

Because life isn’t a vacation. Everything, everything is better on vacation. But that creeping anxiety seeps back in when you throw work back into the mix. And it sucks.

My heart broke into a thousand pieces as I drove back bawling my eyes out leaving my children screaming “mommy” in the middle of Portugal.

The Worst Mother in the World

Yeah, for all the support I have had, that is how I felt and I wonder if it is true. Was it incredibly selfish of me to bring them here? To move them around and send them to a place where they don’t know anyone?

It was fine when we were on vacation but now I have shitloads of work that needs to be done and kids that need to be somewhere else entertained.

I already quit one job today. The one that had my phone pinging all through the night causing anxiety attacks. Between work, kids, lack of sleep, guilt and the feeling of failing at everything… I am not going to lie and say this is easier than it is, I haven’t gotten the balance just right yet. Today was a little teary.

When I went to pick my kids up, Cataleya was holding hands with another little girl and Valentino was happy. They bounded over regardless, anxious to show me what they’d been playing with–and then they didn’t want to leave. It was a little embarrassing as all the parents left with their offspring and mine refused to come home.

I forced myself to remember that, actually, if they had been dropped off at any daycare center in any part of the world they would have been equally resistant.

We’d just spent a rare and intense weekend of having fun, swimming pools, parks, toys, the three of us; of course, they didn’t want it to end…

It’s going to be OK.

I spent the morning thinking I was the worst mom in the world, now I think others may beat me. Something is bound to slip over the next few months, whether it’s my job, a disk, or my sanity…

Oh, and also, you can never have enough wet wipes, diapers, bottles, or snacks. EVER.