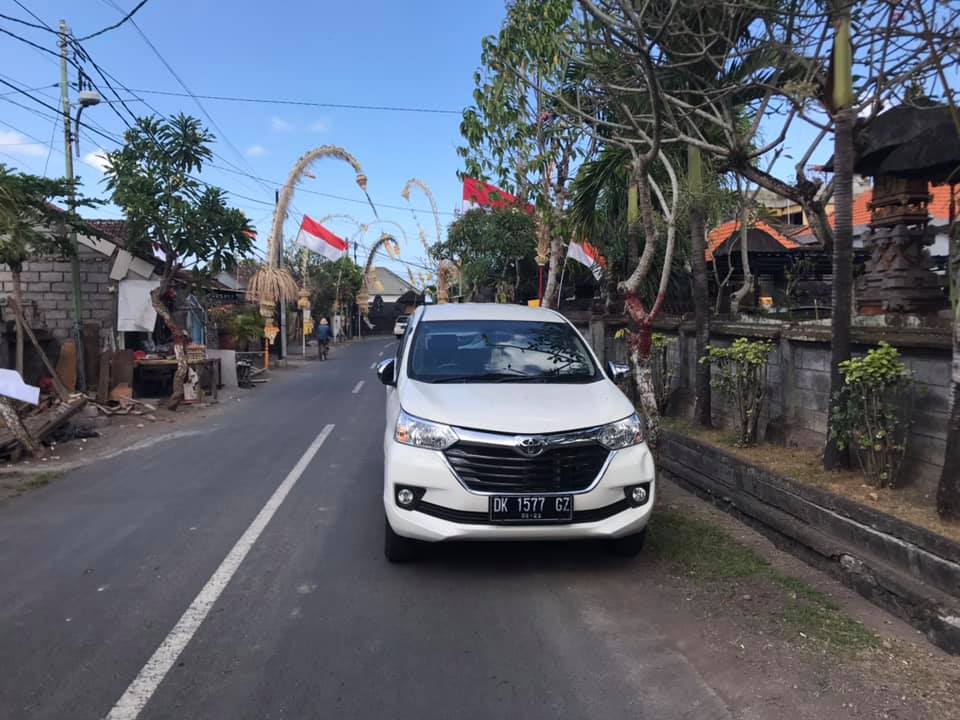 Today was a good day. One of those days that you never forget (as long as you have the brainpower to remember). When my kids and I go on “our adventures” so many things can happen from ending up in a field full of cows to discovering a little slice of Paradise in a hidden corner of the world in Bali.

There are so many reasons not to travel with little kids. I’ve just lived through the main one, which is the horror of them getting sick in a foreign country. Then, there’s just the upheaval, hassle, whining, moaning, and unsettling.

But you know what? Picking kids up and shaking them out of their routine is good for them. Mine are already starting to see the world with different eyes. However my children turn out, I know that ignorance won’t be part of their playbook.

As we drove through the hectic streets around Denpasar today (which I wish I could film while driving but which would be a terribly bad idea with two kids in the back and relying on Google Maps), we stood still in a heavy line of traffic.

Surrounded by mopeds, some carrying mattresses and linen, others laden with wood and building materials, and other still, weighed down with people, Cataleya stared out of the window.

She tapped on the glass trying to catch the attention of the driver on the moped beside her to no avail. She asked me why he didn’t pay attention to her.

Distracted, I said perhaps he didn’t hear her or maybe he was concentrating on the road. She replied that he looked sad and angry, and perhaps it was because he didn’t have enough money to buy food or do the things he wanted to do. I was gob-smacked. My four-year-old was suddenly forty.

Not an attraction that appears among the waterparks, ziplining, and zoos, I discovered Parklife, Bali in Canggu after a little more searching on Google. 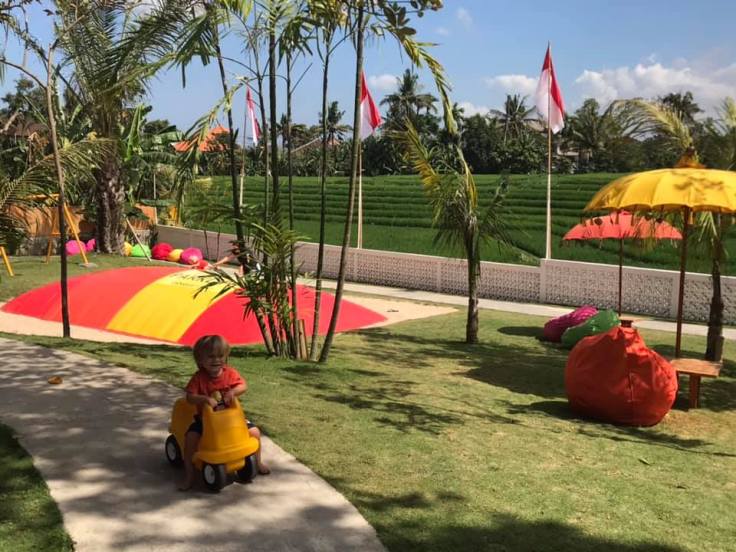 Oh, and I’m starting to drive like a Balinese. That’s not good. I will probably get fined when I get back to Spain for reckless driving. But the constant slew of obstacles in the road, the law of judgment over transit signs, and basically placing your life in the hands of the travel Gods every time you get behind the wheel is starting to become par for the course.

And let’s face it. If you want to go at your own pace, take two kids in actual child seats, and let them eat what they feel like in the back, you need your own car.

Parklife Bali is fairly new, it seems, and whoever decided to open this place worked hard to create a relaxing and functional space for parents and children alike.

This is the first time there have been activities for Valentino as well. Rather than just hang around in the pushchair waiting for his sister, he dove right into the ball pits, mini cars, beach area, and bouncy castles made for his age.

Cataleya didn’t know where to look first–there were just so many things to play with, among open green spaces and shady picnic areas dotted all around. A cafe with WIFI and a menu with glasses of wine, unicorn cupcakes, and real kid-sized portions served on plastic plates.

Clearly, the expat community of western Bali is all over this little slice of heaven where you can actually sit down and relax while your kids play without worrying about them wandering into the road.

The journey here was also different from anything we’d seen so far. Rather than the white-knuckle ride of the capital and its near surroundings, driving to Canguu was a much more relaxing affair (on a relative scale, of course).

We drove passed fluorescent green rice fields, there were straits of the road with no cars on for more than a few seconds and even the occasional cyclist.

There was foliage; luscious plantations and vibrant hanging decorations adorning the streets with the red and white Indonesian flag flying high at every corner. It was still touristy, yes, but there was space here and I started to understand why–beyond the waves–Bali was so appealing to so many.

I Am Clearly a Rockstar

For the first time ever (EVER) while my children were playing, I struck up a conversation with two other mothers. I’ve never had the chance to be in a place such as this where the kids play and leave me alone and other parents are open and talkative. Two mothers had babies younger than mine at a little under a year.

One was from Hungary but lived in Bali and the other a frequent visitor from Sydney. We bonded over the pain of flying with kids, of having them sick while away, and a few other details.

Then, they simultaneously realized that I had two kids running around and that I was their only guardian here-“Oh, you’re here ON YOUR OWN?!” remarked the Australian mother, “fu** me, here I am moaning about how hard it is and I have my husband to help–and we only have one!”

Both mothers nodded at me and told me how courageous I was. It felt good to be recognized by (perfect strangers) but also kindred spirits who know just how hard this type of logistical stuff is with kids. I asked if either of them had been to a temple with the kids here yet since I really wanted to go. Neither of them had.

I smiled and launched into a story of the mopeds that speed past your mirrors and the potholes that look like they would swallow your car whole, as being one of the things that put me off visiting the Tanah Lot temple.

Their jaws dropped–“Oh my God, you’re driving here??” they both asked agape. “You are a superwoman. That’s amazing.” They had both come in a taxi.

I have to confess, it made me feel pretty good and better than that–the children were squealing with delight, giggling, and playing with each other. It was the perfect destination.

They even ate all their lunch, delicious organic ice creams and elaborately baked unicorn cupcakes (most of which ended up in the car and the floor). 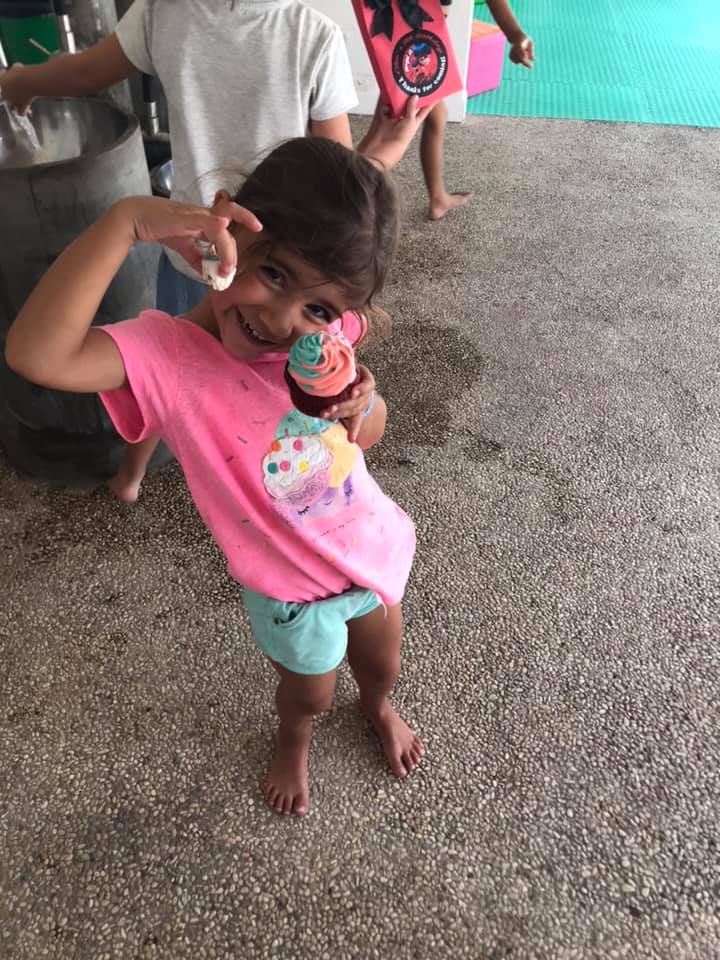 I decided I could do it. I could take them to the damn temple.

We transformed Parklife to Temple Life.

I probably should have read Tripadvisor or something like that before I came. But then again, we probably wouldn’t have come.

It’s that whole overthinking thing once again. If you just go ahead and do it, you have to deal with the obstacles that come your way. Granted, it’s not easy dragging a pushchair up and down hundreds of steps in the heat–and then bounding back up or down to carry your four-year-old too. But, it’s also not impossible. And it was definitely worth it. 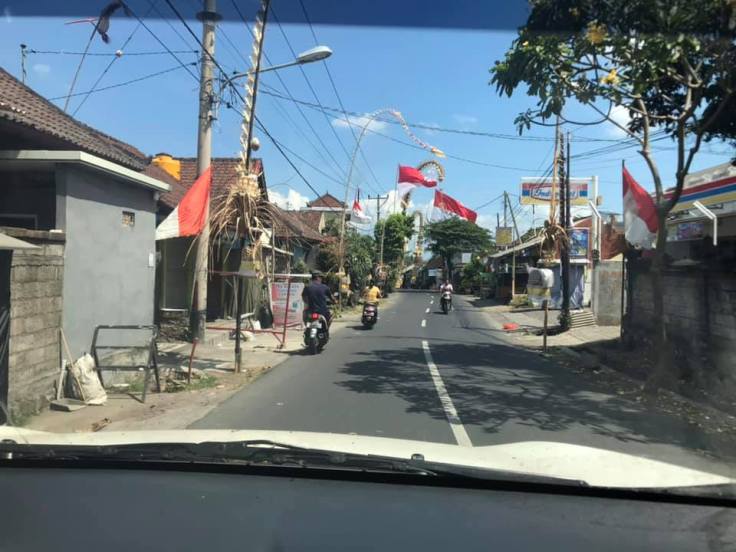 I’m getting pretty confident on the roads now. Making it to the temple site of Tanah Lot in western Bali was really a piece of cake.

Well, we went round in a circle three times following Google Maps. But as soon as I just followed the signposts instead it was so much easier.

After playing tirelessly all morning, I was hoping the kids would sleep in the car. They didn’t. Valentino grabbed a few minutes. But Cataleya did not. That wasn’t conducive to convincing her that visiting a temple was an interesting idea.

Whining and grinding, sweating and scowling aside, when we made it near to the base of the temple, it was worth every moment. Of course, I would love to have gone inside, but I was clearly ill-prepared and in the wrong company. There is no place for a stroller in Tanah Lot nor for a four-year-old with an aversion to walking.

But it’s still such a majestic place to appreciate from the base. The tide was low and we could get quite close–at high tide, the temple dissolves into the sea. It was the first temple in Bali that we had seen and it will probably be the last (at least, with the kids) and certainly, with the stroller.

People don’t help you here. It’s weird. Is this an Asian thing that I wasn’t aware of? People are not oblivious to my struggles; far from it. At some points, they were giggling and pointing, even cheering me on as I bunny-hopped the stroller one painful step after another–with not one offer of help as Valentino’s life hung in my hands and Cataleya whined loudly about her knees hurting and the sun being too hot.

Whatever. My intention was never to take a guided tour nor marvel at every last brick. It was to get close, get a look, take some pictures, and make the best of what I could. Oh, and buy Cataleya some plastic flowers for her hair of course, and Valentino a T-shirt that says “I Love Bali”. I couldn’t resist getting that.

Despite the grizzling, it was such a perfect day. The kids had so much fun at Parklife. I thought they would sleep their way to the temple but instead, they pointed and laughed and remarked at the green fields and passersby on the roads.

All mothers will understand that to get anything out of their kids, a decent bit of bribery goes on.

If only Cataleya would walk one more step, we’d spend the rest of the day in the pool at the hotel.

We arrived back at Jayakarta shortly before sunset and in time for the two of them to splash and play in the pool. We even went in the “big pool” the three of us, as Cataleya gains more confidence in her armbands and Valentino loses his fear of water.

I’m ecstatic that he’s no longer afraid of the pool or the bathtub (although, that now means that I am 100 percent obligated to spend all of my time in the water with him).

I didn’t mind too much though. We’d had such a wonderful day. By hook or by crook, I got my kids to the temple. We found the perfect playhouse pocket in Bali and we survived another adventure on the streets. I could stay in the pool until I shriveled. And I did.

As the sun started to go down and I prepared to get the kids ready for bed, I thought about the women I had met that day. They, like me, had traveled to Bali with young kids, we had many things in common, and they both called me their hero.

I had felt so low this time last week. When Cataleya was sick and everything was going wrong. I questioned my sanity and the wisdom of my intentions.

Now, I realize that it’s just life. Most things worth having are hard to get hold of, otherwise, we’d all have them. And most places most people never go to or there would be no road less traveled.